Marvel Vs Capcom 2 bring the classic arcade fighting game to the iOS devices. This game features both the Marvel and Capcom superheros and also a thrilling Versus Mode Battle gameplay. This game also consists of “Flick Button,” a new control feature that streamlines complex inputs. 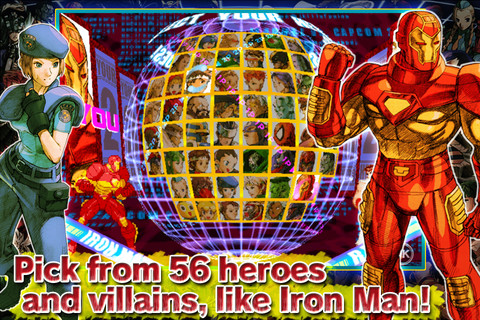 Collection of Heros available in Marvel Vs Capcom 2 :

This game includes all 56 characters from the Marvel and Capcom franchise. There is a special promo for the app due to the release of the Avengers Movie. 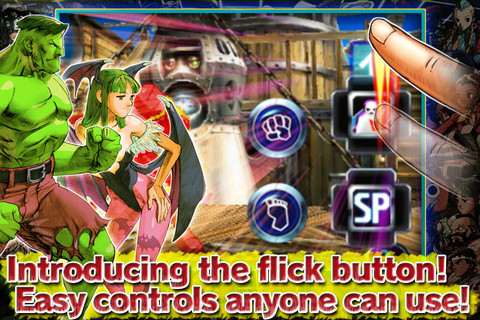 “The game will be available for $4.99, but in celebration of The Avengers theatrical film, act now to take advantage of the special launch price of $2.99 from April 25th until May 6th”

Wolverine & Spider-man VS. Ryu & Chun-Li ! One of the most popular arcade-fighting games of all time arrives on the App Store for your iOS tablet or mobile device! Marvel vs. Capcom 2 brings together legendary characters from the Marvel and Capcom franchises to duke it out in an insane, action-packed, tag-team fighting experience. From Ryu to Wolverine, pit your favorite heroes in dream match-ups thanks to the robust 56-character roster. With the optimized iOS touchscreen controls, 2-player versus-mode, unlockable secrets and characters, you better buckle up and prepare to be taken for a ride!

・A full-featured port of one of the best fighting games of all-time
・Marvel Vs Capcom 2 has previously only been enjoyed in arcades and consoles for over a decade. Now enjoyable anywhere, anytime with the iOS version.
・Deep 56 Character Roster Featuring Characters from the Marvel and Capcom franchises
・One of the largest character rosters in any fighting game to date
・Bringing together Marvel’s greatest comic-book heroes and Capcom’s fiercest video-game fighters
・Versus Mode Battles
・Users can connect with other iPhone users via Bluetooth and play against each other
・New streamlined touchscreen controls optimized for iOS
・Introducing the “Flick Button,” a new control feature that streamlines complex inputs

The game can be played on any version after iOS 5.0, on iPhone 4, 4S / iPod touch 4th generation/ iPad 2, iPad 3rd generation. Note: This application will not work on the iPhone 3GS, iPod Touch 3rd generation or earlier, nor the iPad 1st generation.

One thought on “Marvel Vs Capcom 2 Classic arcade-fighting game now available for iPad,iPhone and iPod”