Remember Jetpack Joyride ? Cool Arcade game where Barry take the Machine Gun powered Jetpack for a ride in secret laboratory. Today Halfbricks, the brains behind the game have announced that the game is getting some Huge updates with the introduction of new game changing gadgets.

Here is the video playlist with all the cool gadgets videos :

In a nutshell, users can look forward to 15 game-changing gadgets which are tailored to suit the needs of any player no matter how they like to play. These gadgets will be available for purchase in the Stash, giving more options to players stockpiling those hard-earned coins!

There are more than 100 potential combinations in total and players will need to work their way through five sectors in order to unlock every gadget in the game. Players can also mix and match any two gadgets, which can then be used an unlimited number of times after purchase. Read on for a full breakdown of the newest additions to Jetpack Joyride including how much they’ll cost and their item descriptions! 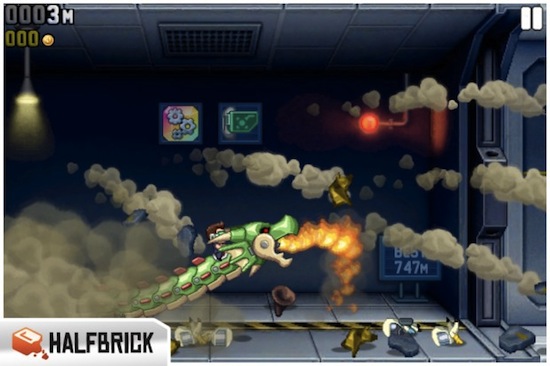 Nerd Repellant (2000 Coins)
The patent-pending formula is so potent that the whole laboratory had to be abandoned.

Insta-Ball (2000 Coins)
Bounce off the floor instead of going splat. Great for traveling a few extra meters. 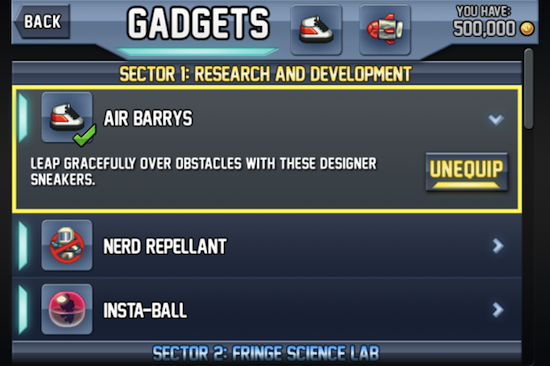 Gravity Belt (5000 Coins)
Makes the ground come at you a lot faster than usual. Be sure to bend your knees when you land.

Missile Jammer (5000 Coins)
Replaces the missile guidance program with pictures of kittens downloaded from the internet. Only works if the kittens are particularly cute.

Token Gift (5000 Coins)
What do you give someone who has everything? A free final spin token, of course! 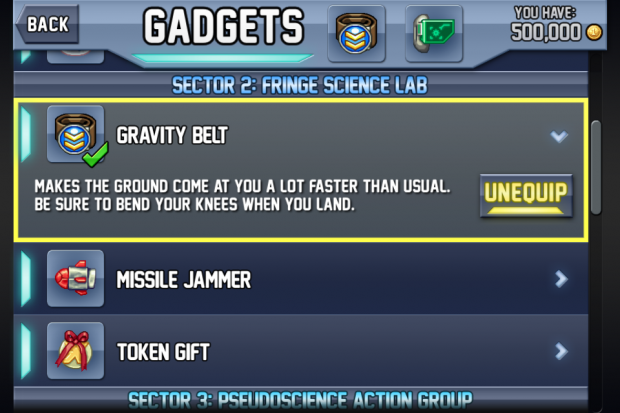 Freeze-O-Matic (3000 Coins)
There’s no better way to cool down after a hard run than being snap-frozen in a solid block of ice. It also helps you slide a few extra meters.

X-Ray Specs (4500 Coins)
This high-tech eyewear is both fashionable and functional. Now you can look inside vehicle pickups and other places you’re not supposed to see.

Gemology (6500 Coins)
A special blingification technique that converts coins into high-value gems. For some reason it only works on coins minted in 1985. 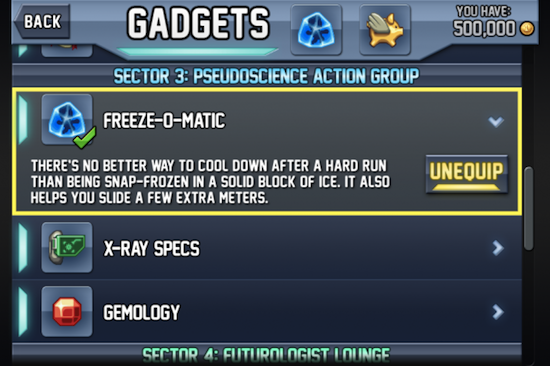 Ezy-Dodge Missiles (5500 Coins)
If you’re going to play a game of chicken with a missile, make sure it’s an Ezy-Dodge!

Magnetic Tokens (4500 Coins)
Every token is fitted with a super-strong magnet. They are easier to collect, but will probably wipe your credit card.

Flying Pig (6000 Coins)
This highly-unstable coin transporter was designed by a scientist with a particular fondness for physical comedy. 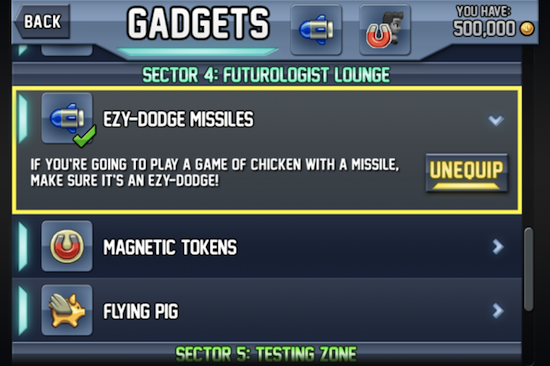 Free Ride (5000 Coins)
Stop off at the motor pool before smashing through the laboratory wall. Why didn’t Barry think of this earlier.

Coin Magnet (6000 Coins)
Once you get used to the feeling of being endlessly pelted with coins you will start to wonder how you ever lived without it. 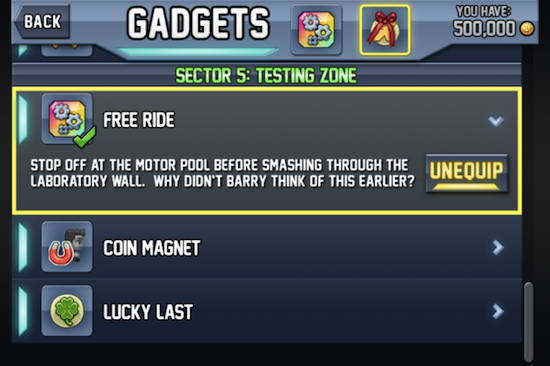