We all know that recently Saurik aka Jay Freeman has been very active lately and providing fixes to Cydia, the jailbreaking tool he created. On April 1, he pushed the version 1.1.6 update to Cydia which removed the obsolete code responsible for the “Dickbar” functionality in Cydia. 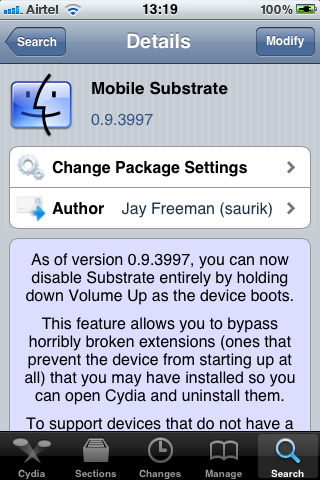 A day ago Saurik released a new version of the Mobile Substrate upgrading it to the version 0.9.3997 and bringing a lot of new features to the desk which he best describes as below:

As of version 0.9.3997, you can now disable Substrate entirely by holding down Volume Up as the device boots.

This feature allows you to bypass horribly broken extensions (ones that prevent the device from starting up at all) that you may have installed so you can open Cydia and uninstall them.

To support devices that do not have a Volume Up button (the first-generation iPod touch), you can alternatively hold down the “Clicker” (not Volume Up) button on your headset or earphones.

(A special thanks goes to @oLunatiko for help implementing this feature!)

I personally have a jailbroken iPhone and have faced many times when a tweak from a third-party installed from Cydia puts the phone into an endless boot or the phone is stuck up at the Apple logo, and if the user is lucky enough, the iPhone might restart after a hard reboot or else the last option is to restore and loose all the valuable data within the phone. But now with the new upgrade, all one has to do is press the Volume Up button when stuck in boot and the phone will boot into Safe-Mode and one can uninstall the tweak causing the issue. So, this surely serves as an important update for Cydia users using tweaks to customize their iPhone’s.